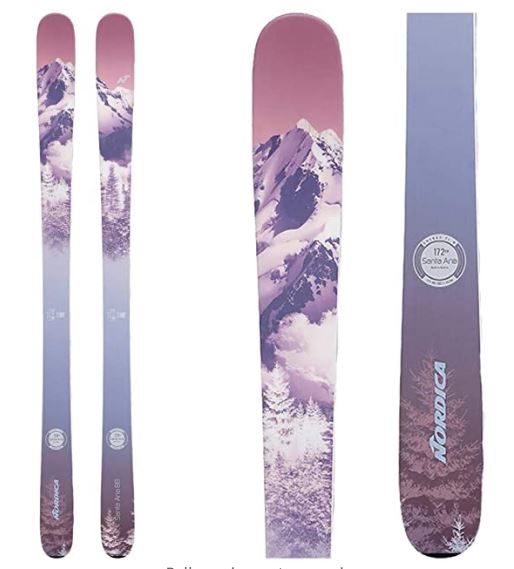 The Nordica Santa Ana 88 skis are an amazing choice for a versatile all-mountain ski that loves to be on edge. As a narrowed-down version of the wider Santa Ana ski, the 88 has a similar taper shape and rocker profile to the wider skis, but with greater torsional stiffness and more edge-to-edge metal. This all becomes possible due to the Terrain-Specific metal laminate that Nordica employs in these Santa Ana skis. Wider metal in the narrower skis and narrower metal in the wider skis, the width dictates the amount of torsional stiffness and edge grip. As a result, the 88 is the strongest carving of these Santa Ana skis, and the fact that it still has taper shape and rocker profile of the wider skis in the line, it’s actually a pretty darn good floater for its width. In the 165 cm length, the skis generate a 15-meter turn radius, so they love to make clean and round turns on any and all snow surfaces. To aid in this endeavor, the skis have a Carbon Chassis that adds carbon stringers to the fiberglass wrap, allowing for a stiffer longitudinal flex for even stronger carving capabilities. True tip Technology lightens the swing weight, bringing more of the mass closer to the middle of the ski. This makes the Nordica Santa Ana 88 extremely stable and solid underfoot for a maximum of on-trail performance.

Only 1 left in stock