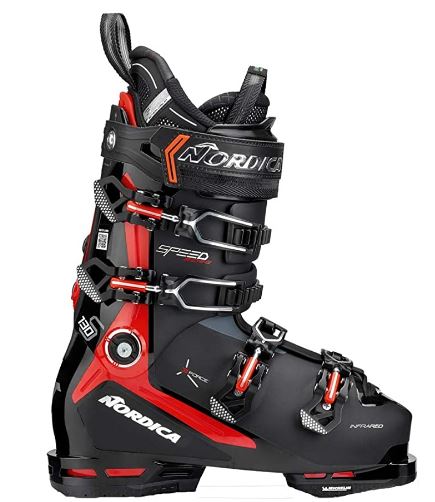 The Nordica Speedmachine 3.0 130S ski boots are a fantastic improvement on an already amazing product. For years, Nordica has been making some of the best ski boots on the planet, and most skiers who know what they’re talking about will tell you that ski boots are the most important pieces of gear that you can own. They are the first and only part of the whole ski getup to actually touch your body (other than poles, mere sticks!), so it’s important that you get the boot side of the ski gear equation quite right. Ski boots are all about transferring energy, and the Nordica Speedmachine 3.0 130S’s are about as good as it gets thanks to a few new technologies. First, the 3Force Technology liner features a moldable cork ankle pocket and an adjustable tongue, so you get the maximum amount of performance and fit. It can happen right out of the box, but an experienced boot fitter will have no trouble simply heating and molding the liner to your foot. The shell is the other big improvement, with Nordica using a honeycomb-shaped spine and lower portion to drastically increase stiffness and precision but at a lighter weight. Like most other things in the sporting world, it’s all about achieving similar or better performance but at a lighter weight. These 130-flex and 100-mm forefoot last boots are some of the highest-achieving boots on the planet right now, available and included with GripWalk soles, these boots have all you need to tackle the mountain this upcoming season.